PM May's Lancaster House speech delivers nearly all of what this blog sought to achieve.

Martin Callanan MEP, Conservative Party leader in the European Parliament, sits alongside Nigel Farage MEP, UKIP Leader, as the latter finally reveals in public a part of the dodgy tax arrangements put in place by Britain's three main parties to reward themselves for their betrayal of Britain's democracy and sovereignty.

All who have served the Conservative Party down recent years should take the time to consider the gravity of what Nigel Farage, who today has earned that and the following respectful title, yesterday he began to reveal.

A poor attempt at artwork to extend my tweeted joke last evening on Twitter, prompted by a press release from Number 10 Downing Street that Merkel would arrive there at 7:15pm and there would be pictures on the door. (I hope the Daily Mail will not object to my using their picture from their report linked here). 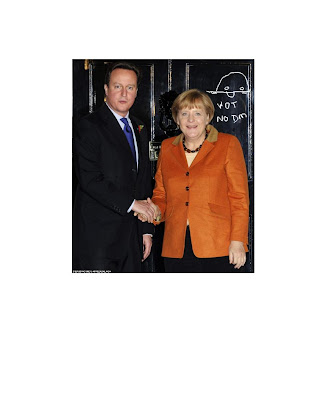 A Chat Forum on Chads, Kilroy wuz 'ere origins etc is here
Posted by Martin at 8:56 AM

David Mellor, who ran Mr Hunt’s department under the last Tory government in the 1990s, said Mr Hunt had only survived to protect Prime Minister David Cameron. Mr Mellor said that he thought there would be a “number of scalps” from the fallout of the Leveson inquiry into press standards. He told Sky News’ Murnaghan: “Jeremy Hunt will probably have to go. But I think the real scalp is the Prime Minister – he won’t have to resign but his credibility is blown away.

The report may be read in full from the Daily Telegraph this morning linked here.

Such a conclusion is not even related to that newspaper's main headline today regarding the latest item of expenses fiddling by senior politicians, in this case Tory Party Chair and Cameron appointee, the Cameron ennobled Baroness Warsi, read here.

Everything, but everything, that Cameron has either touched or attempted during his trenure as party leader, itself achived as a result of blatant manipulations, fully detailed on this blog, has turned to complete disaster not just for his own party as was initially the case,) but now for the country itself.

It is only the Conservative Party that can now effect the obvious remedy!

Read also AKHaart here on Cameron!
Posted by Martin at 7:59 AM

Tories believe Murdochs can do no wrong!

The Conservatives believe Cameron and Osborne are fit people to run the country, naturally they would believe the Murdochs are fit to run such a company. Do any left in the party now hold a moral scruple between them?
Posted by Martin at 6:37 PM

How can Cameron and Osborne continue after Leveson today?

The first and last paragraphs of one report on evidence given by James Murdoch, at the inquiry today, linked here, was as follows:


James Murdoch met David Cameron 12 times while he was leader of the opposition, including four meetings also attended by Rebekah Brooks, the Leveson Inquiry has heard.....

Mr Murdoch confirmed he was "friendly" with Mr Osborne. He said he had one discussion with the Chancellor about News Corp's bid to take over BSkyB. Mr Murdoch said his conversation about the proposed buy-out of the satellite broadcaster with the Chancellor "would have just been to be grumpy about it taking a long time and being referred to (regulator) Ofcom, which I was very clear in public about at the same time".

The Murdoch's have owned British politics for decades it appears from all this mounting evidence - they are therefore apparently as culpable for the nation's decline as is the EU!
Posted by Martin at 3:49 PM

Cameron's dumping of his party

As Cameronism collapses, the following point was well made by Peter Oborne yesterday, linked here:

In private, Cameron’s circle make no secret about why he has chosen to govern through a tight-knit inner group. The leader and his Chancellor were the two favoured graduates from the exclusive and well-trained school of modernisers (initially led by Michael Portillo and Francis Maude) which captured the party at the turn of the century. This faction was transfixed by the success of Tony Blair – rather than being revolted by New Labour’s methods, they sought to copy them.
They enthusiastically embraced many of the worst aspects of Blairism: the obsession with very rich men; the divergence between public statements and private conduct; the preference for policy-making through private cabal; and the almost demented Blairite contempt for their own party members.
Posted by Martin at 10:44 AM